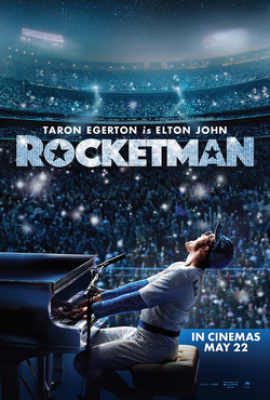 From the time Reginald Dwight was a young boy, he was a musical prodigy. Unfortunately, he was also unloved by his neglectful and absentee parents. After meeting lyricist Bernie Taupin (Jamie Bell), Reggie changes his name to Elton John (Taron Egerton) and the two songwriters become worldwide hits.

However, Elton struggled to find love. Having missed out on it when he was a child, he looks for it in all the wrong places. He forms a relationship in the 1970s with John Reid (Richard Madden), who takes over as his manager, and has a short-lived marriage to Renate Blauel (Celinde Schoenmaker), but turns to drinking and drugs in order to get by.

Finally, after years of struggling with substance abuse and depression, he finally comes to accept his sexual orientation.

The film includes many classic songs, including "Crocodile Rock," "Don’t Let the Sun Go Down on Me," and of course, "Rocketman," all performed by Egerton.